ENERGY CRISIS AND ENVIRONMENTAL IMPACT: FROM THE 1970S TO TODAY

The energy crisis exacerbated by the most recent geopolitical events brings back memories of what happened almost fifty years ago, when the oil supply crisis marked a halt to the economic boom that had until then seen a period of steady growth. Those events led to a collective awareness, albeit tentative, of the extreme dependence of all human activity on nonrenewable energy sources and the need to review and rethink economic growth patterns. Just as timidly, people began to talk about the impact on the environment and natural ecosystems of such a growth model and the need to develop sustainable future development models that would not jeopardize the possibility of well-being and growth for future generations.

The relationship between the energy crisis and its environmental impact, in terms of emissions and thus increase in the greenhouse effect and pollution, requires us to think about even faster actions than those already taken at present, and above all concrete ones, with a view to a future increasingly untethered from nonrenewable energy sources.
The goals to reduce global greenhouse gas emissions are those set out in the Paris Agreement, signed in 2015, and aim to keep global temperatures rising below 2°C. The agreement fits into the broader framework of the 2030 Agenda, and refers to point 13 in which measures to "combat climate change" are defined.

In Europe, the construction sector is the most energy intensive contributing 40 percent of energy consumption.
Oil companies, more generally high-emitting industries, are reducing their operational investments due to increased regulatory uncertainties related to decarbonization. They therefore prefer to redistribute the proceeds of their business to shareholders and keep commodity and product prices (e.g., gasoline) high so that they can generate as much profit as possible in preparation for the inevitable replacement with sustainable alternatives.

WATER IS THE TRUE PROTAGONIST

Among the technologies used to improve the energy needs of buildings, green roofs stand out for the plurality of benefits derived from their use. Not only do they improve the energy performance of the building envelope but, as part of the so-called Nature Based Solutions(NBS), they contribute to making man-made areas less of an impact on the environment and improve urban comfort.

Starting with the study of the natural behavior of plants and the observation of the increasingly tangible phenomena of climate change, Daku developed the Blue Green Roof (BGR), a solution that considers water as a precious resource that should not be wasted and whose potential is to be intelligently exploited. The fundamental idea on which the BGR was conceived is that water, as an energy carrier and natural thermoregulatory element, should not be disposed of in the sewage system and quickly removed from urban environments, but should be conserved to reuse its potential. In BGR, rainwater is stored within the stratigraphy and is used in a calibrated way for irrigation.In this way, BGR contributes to decreasing the negative effects of water bombs and greatly increasing the permeability of urbanized areas.

With the DAKU IRRIGA irrigation system also, developed to accommodate the natural development of the root system of plants, the transpiration capacity of plants is improved and the amounts of water used to sustain the plant cover are reduced compared to a normal irrigation system.The presence of stored water in the roof does not lead to disadvantages to the thermal insulation performance of the envelope but, on the contrary, increases its mass and contributes, especially in summer, to delay the entry of heat into the building. The entire roof and the BGR storage and irrigation system are managed through an IoT control unit, which can understand the amount of water stored in the roof and manage it as needed and in relation to incoming rain. Considering water as a potential for green roof efficiency is the real key to the Daku innovation paradigm shift.

A) Energy impact for the city:
Numerous studies have investigated the effectiveness of green roof systems, demonstrating how small actions on the design of urban areas have a substantial impact on the energy demand for summer air conditioning of buildings. BGR only improves on what has already been verified with traditional systems, further increasing its positive effects at both urban and architectural scales. Above all, being able to manage water intelligently, it is a comparable tool to lamination tanks, with the difference that the water stored in the BGR is not eliminated in the 48 h after the rainfall event, but is retained and managed through the IoT system connected to weather monitoring stations. Studies show the relationship between rising city temperatures and increased energy consumption for air conditioning. Conserving water only improves these already overwhelmingly positive results:
Akbari explains that the increase in temperatures in some U.S. cities (since the 1940s, a period when the temperature difference between urban and rural areas was still virtually zero) has been between 0.5°C and 3°C. This phenomenon has resulted in spikes in building cooling energy demands of about 2 to 4 percent for each degree of temperature increase recorded, for a total increase in air conditioning consumption of 5 to 10 percent.
In energy terms, in a city like Los Angeles, the 1°C increase consists of an average of 500 MW more energy consumption for cooling. The consequences of this phenomenon not only cause an increase in consumption and thus greenhouse gas emissions, but also result in an increase in smog, which is closely linked to rising temperatures.
The higher the air temperature the easier the synthesis reaction between pollutant molecules: it has been attested that as air temperature increases by 1°C, above 22°C, the incidence of smog increases by 5% (Akbari et al., 2001).

B) Energy impact for the building:
The green roof, especially in summer regime, constitutes a thermal mass for the roof and increases its thermal wave displacement capacity. The presence of mass due to the green stratigraphy and the transpiration action of the plants, in combination, result in the decrease of temperatures below the green package and at the level of the vegetation. Studies have used simulations to define the amount of energy saved through the use of green roofs, and the resulting savings in energy bills for cooling. The Daku trial showed that the BGR's water-filled water storage basin promotes a lowering of temperatures below the green stratigraphy by 3-4° C compared to what is recorded on a BGR with the empty basin, which instead records temperatures much more similar, though lower, to the package with traditional green roof stratigraphy. The result is an increase in performance compared to a normal Green Roof, which is still improved over a traditional roof.
One study (2020) focused on verifying the difference in energy consumption for cooling a portion of a building of about 280 square meters in a region in eastern Spain. The use of the green roof verified a reduction in energy consumption for cooling by about 30 percent compared to the existing, inverted, XPS-insulated roof, with a reduction in energy demand in the winter period of 15 percent.
In another study (2019) that observed the behavior of 3 prototype green roofs in the Mediterranean area, the efficiency of a green roof compared to a traditional roof in lowering temperatures below the green package emerged. The study also verified the greater efficiency in summer of a roof with the storage and drainage layer compared to a roof still with the same layering and the addition of a 30 mm insulation panel.

Since the performance of green roofs has academic feedback, but the thermotechnical value of the technology tends to be difficult to measure, even according to what is indicated at the normative level, the question arises as to what factors create this discrepancy. First, performance is strictly dependent on building characteristics, such as, for example, exposure, number of windows, type of stratigraphy of vertical partitions, orientation, building shape, etc.

Therefore, academic research that is "applicable" indifferently on any type of building is opposed, as a conception, to the rigor necessary to carry out energy certification. Even when equations and proportionality are known, it is much easier at the certification stage to refer to a software calculation that examines the insulation potential of the various components than to refer, with all the difficulties and risks involved, to experimental data and real simulations. Some studies have used, in juxtaposition with field tests, software that can evaluate the thermotechnical performance of a green roof properly, considering it as a dynamic system and also including some of the benefits of water as an energy carrier. The following are some of them: TerMus, Pan, Wufi, Hydrus- 1D, DesignBuilder, EnergyPlus, TRANSYS code. 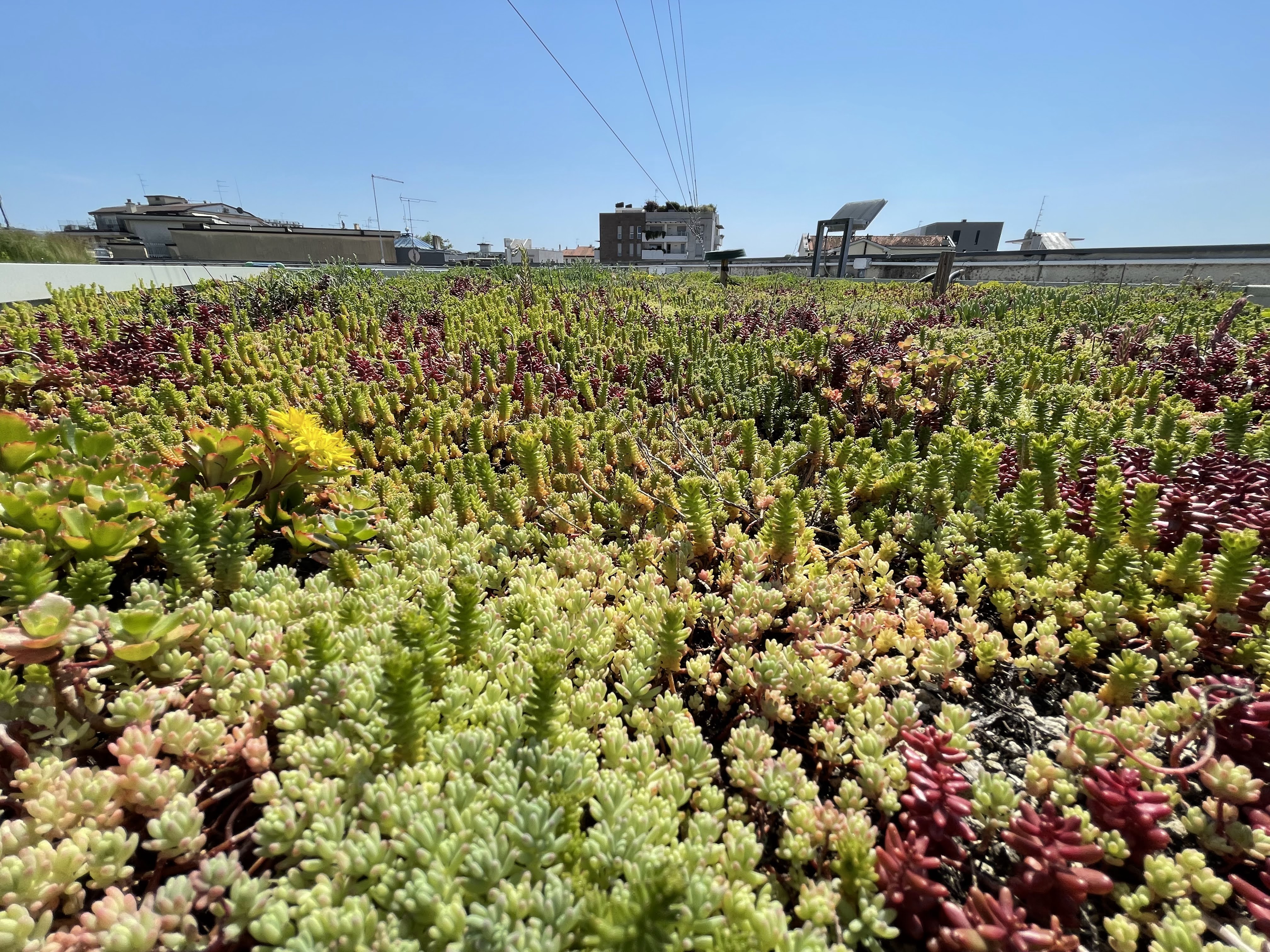 The application of green roof solutions brings numerous benefits, at multiple scales and with benefits in different areas: in urban areas, the use of NBS solutions will be increasingly imperative to counter the effects of climate change and to decrease the energy needs of buildings, a pressing need given the rising cost of energy. The Blue Green Roof (BGR) contributes to these goals in the same way that regular Green Roofs do, but it differs from other solutions because it considers water as an energy carrier and a powerful element of natural thermoregulation.

Water is a precious resource and should not be wasted: this is precisely why the BGR conserves rainwater in the roof, working like a lamination tank, and reuses it for irrigation of the vegetation cover in a calibrated and intelligent way. The IoT technologies employed to make the roof more efficient make the BGR an active water management system that is in continuous relationship with the context and climate in which it is installed.

Reading many academic studies has revealed the difficulty in understanding and modeling the impact of water as an energy carrier; this difficulty is due to the presence of many factors that affect the description of its behavior. In addition, any results obtained from experiments are difficult to apply to different projects and contexts where the presence of conditions and external factors different from the models, inevitably create dissimilarities in the behavior of the technology.